I’ve been recycling laptop batteries for a while now, and I thought it’d be a good idea to summarise things I’ve learned so far.

1. The initial voltage of a cell doesn’t always determine its shape.

Before I started the process, I found an information here and there, saying that Li-Ion structure gets irreversibly damaged if discharged below 3 V. Some people suggest that cells below 2 V should be automatically discarded and better not charged at all. What I can confirm for sure, is that if a cell is above 3 V, it’s more likely to be in a good shape. However, it isn’t unusual to find healthy cells discharged to almost 0 V. They require a little bit more work because your charger may not recognise them - especially when it’s a NiMH/Li-Ion charger like mine (such cells are usually treated as NiMH-s). The easiest way to bring such a cell back to life is to balance it with another cell above 3 V - just connect these cells in parallel for a minute, and insert to the charger after that. Most of them start charging normally, some of them are 2000+ mAh.

2. Check if a cell is able to maintain the voltage.

Inability to maintain the voltage is usually a very bad sign. A healthy cell should be able to store the energy for years. I’ve seen many high capacity cells that dropped below 3.7 V a week after being charged to 4.2 V. It means that some of their energy got lost, and was slowly dissipated in heat. If you connect such a cell in parallel with healthy ones, it’ll most likely be draining the rest of cells, warming itself up. 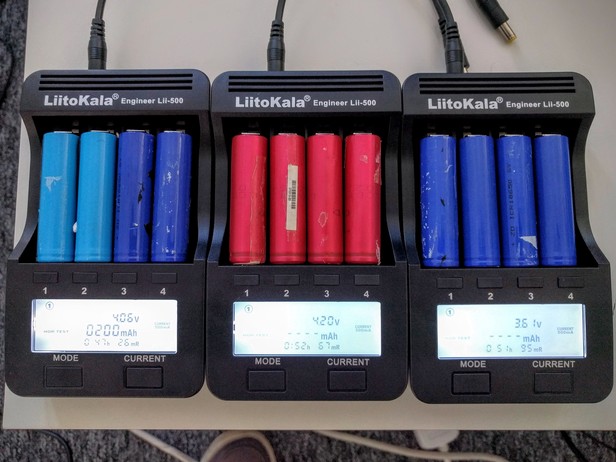 I’m testing my batteries using Liitokala Lii-500 chargers, and I’m quite happy with them. Apart from the voltage, measured capacity and charging time, they also show cell’s internal resistance in milliohms. I thought it might be useful information, but I quickly noticed that the resistance reads tend to be significantly different when measured multiple times for the same cell. The very same cell may be 120 mΩ when you insert it in the charger for the first time, and drop to 60 mΩ when you insert them after being fully charged. I believe my chargers are not very accurate in this matter, and measuring internal resistance may require a little bit more expensive tools. I’ve decided to completely ignore this value for now.

4. Don’t push your cells too hard.

At the beginning, I used to charge my cells at 1 A current to make the whole process a little bit quicker. It turned out to be a bad idea because some cells weren’t able to survive the charging process. I figured out that some of them were really hot when they were getting close to 4.2 V. Things got way better when I switched to charging at 500 mA current - no more dying cells and overheating problems. Now I’m also able to run 3 chargers connected to a single 12 V, 3 A power supply with no issues at all.